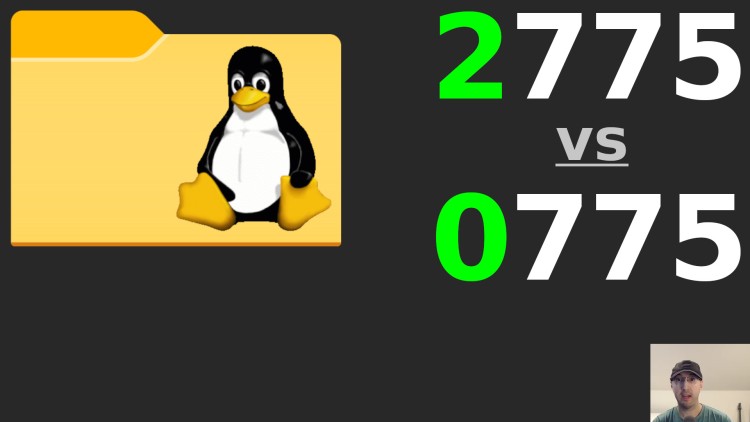 This is handy if you have 2 different users deploying code to the same directory, such as a deploy user and CI user.

Quick Jump: Going Over the Permission Problem | 0775 vs 2775 Permissions for a Directory | Demo Video

This could be used for a number of things but let’s focus on 1 concrete example.

Going Over the Permission Problem

For example, let’s say you git push your code to your server and it ultimately gets checked out to /srv/mysite. This could be a static site or your web application, it doesn’t matter.

Now let’s say you sometimes deploy your code from your dev box by pushing your code as the deploy user but you also have CI set up which can push code to your server.

For security reasons it would be a good idea to use a heavily restricted ci user that can only git push code to your server and nothing more. This user wouldn’t even have an ability to run a shell like Bash, instead you can use git-shell which provides restricted git access.

It’s worth pointing out when you git push to your server, part of that process will run a git checkout in perhaps a git post receive hook. The details aren’t important for this post’s topic but it’s important to know that files will be created as the user who performed the git push.

That’s because when you git push your code, you’re SSH’ing into your server as that user. The post receive hook runs and that script runs all commands as that user, such as git checkout and whatever else you want to do.

That means /srv/mysite (the checkout directory) needs to be writeable by both users. You can do this without doing anything fancy with permissions by simply creating a common group such as sshusers or whatever you decide to name it and add both the deploy and ci users to that group.

You can create a new system group with groupadd --system sshusers. The --system flag ensures your group will be created with a group id less than 1000 or more specifically what’s defined in /etc/login.defs.

If you run chown deploy:sshusers /srv/mysite then your directory will allow both the deploy and ci users to be able to write to it. That would look like this:

Then as the deploy user you could do touch /srv/mysite/test and you’ll end up with:

Then let’s say you git push your code as the ci user. You’ll end up with:

This technically works, but as the ci user you’ll get a permission error if you try to overwrite a file owned by deploy:deploy, such as if you were able to run touch /srv/mysite/test (assuming the user had permission to run the touch command, I’m only doing this for an example). That will produce touch: cannot touch 'test': Permission denied.

Basically what this means is if you git push as the deploy user you’ll get permission errors when git pushing as the ci user and vice versa. Neither user will be able to write to files owned by the other user.

That leads us to the problem. How can we have 2 different users be able to git push or more generally write to each others’ files in a shared directory?

By default when you create a directory on Linux, unless you modified the default behavior then you’ll get 0775 as the permissions, as seen below:

If you don’t specify the 0 then it defaults to 0 which gives us the default behavior we all know. If a user creates a file in this directory then it will own the file at the user and group level.

Here’s a little chart of the possible values you can set:

We can use 2775 which will set the setgid bit. Now if a user creates a file in this directory then it will own the file but the group will be set to whatever group owns the parent directory. That’ll solve our problem!

That means we can do this:

And now we can see the new access permissions:

Now as the deploy user you could do touch /srv/mysite/cool and you’ll end up with:

Notice how the group is set to sshusers. The ci user and any other users in the sshusers group will be able to write to this file without getting a permission denied error. Now we can safely deploy our code to our server as 2+ different users.

In the video I incorrectly said that setgid is a type of sticky bit, that’s not the case. Both setgid and sticky are their own types of bits.

Do you use this pattern on any of your servers? Let me know below.