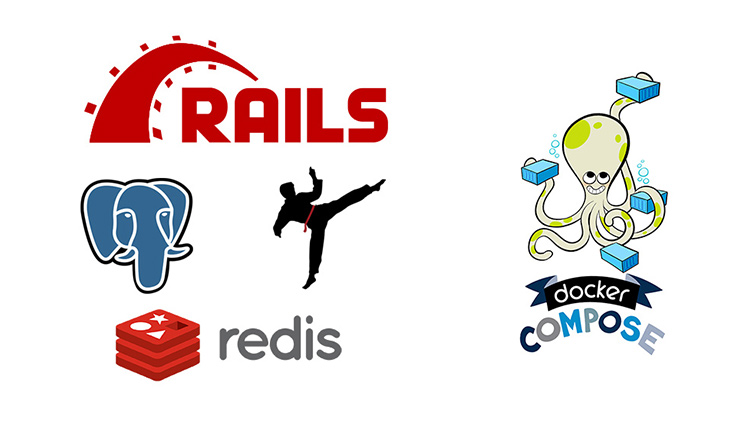 Learn how to install and use Docker to run a Rails 5, Postgres, Redis, Sidekiq and Action Cable app in development with Docker Compose.

The code base we’ll be working with is compatible with Docker 17.06 and Docker Compose 1.14, and I’m sure it will continue to work with future versions of Docker, so feel free to install the latest versions of both.

The focus of this blog post is on Dockerizing a Rails application that has a number of moving parts. We could use rails new to create a new project and build it up, but it would be faster just to use a pre-made application instead.

We’re going to be using a base application provided by orats, which is an open source tool to generate opinionated Rails projects.

If you want to learn more about what this base app has to offer, then I recommend reading the orats README file for that. This article will cover just the Docker specific side of things.

What About Existing Rails Applications?

This article is very general and you can apply everything you’re about to read to your own application instead of the orats example application.

Nothing you’re about to read is specific to orats at all. You’ll just need to create a few files since you won’t have them beforehand.

Since you’re very likely a Ruby developer, you have Ruby installed on your work station so installation is as simple as gem install orats.

Feel free to use whatever editor you want, but if you like Sublime Text 3 and you want to configure it for Rails, Docker and more then check out my post on 25 Sublime Text 3 Packages for Polyglot Programmers.

In order for logs to function properly, Docker expects your application or process to log to STDOUT. This is a very good idea because the concept of managing log files will now be de-coupled from your Rails application.

You can choose to have Docker write those log entries to syslog or another local service running on your server, or you can ferry the log output over to a third party service such as Loggly.

In either case, you need to make a small adjustment to your Rails app:

In the orats base project, I’ve decided to set up logging in the application.rb file because it will be common to all environments.

We’re just setting Rails up to log to STDOUT and then we also set up a custom formatter to include both the subdomain and uuid in each log entry.

I like doing this because it makes filtering logs very simple – especially when your application grows in size and has many moving parts.

To get a better understanding of this file, then check out my shiny new Dive Into Docker course.

At this point we could build the image and you’d be able to access the Rails app, but let’s avoid doing that for now.

This file isn’t technically part of Docker, but it’s partly used by Docker Compose and the Rails application.

By setting the COMPOSE_PROJECT_NAME to my_dockerized_app, Docker Compose will automatically prefix our Docker images, containers, volumes and networks with mydockerizedapp.

It just so happens that Docker Compose will strip underscores from the name.

There’s plenty of other values in this .env file but most of them are custom to the Rails application. We’ll go over a few Docker related values in a bit.

Run the Ruby on Rails Application

Docker Compose automatically pulled down Redis and Ruby for you, and then built the website, sidekiq and cable images for you.

We can also see which ports the services are using and exposing.

If you installed Docker through the Docker Toolbox then you’ll need to make 3 quick changes to the .env file. If you’re running Docker natively then you can access http://localhost:3000 right now.

Toolbox users need to change a few instances of localhost to 192.168.99.100 or whatever your Docker Machine IP address is. You can determine your IP by running docker-machine ip from a Docker-enabled terminal.

At this point you’ll notice that it throws an error saying the database does not exist. No worries, that’s expected right? We haven’t reset our database yet.

Interacting With the Rails Application

This section of the blog post will serve 2 purposes. It will show you how to run Rails commands through Docker, and also shows you how to initialize a Rails database.

What’s going on with the above commands?

The --user "$(id -u):$(id -g)" flag ensures that any files being generated by the exec command end up being owned by your user rather than root.

Since we have volumes set up in docker-compose.yml you’ll be able to actively develop your application as if it were running natively on your OS.

Try going to app/views/pages/home.html.erb, then make a change to the file. All you have to do is save the file and reload your browser to see the changes.

You’ll want to goto your Docker Compose terminal tab and press CTRL+C. Then for good measure, type docker-compose stop. Sometimes Compose bugs out and won’t stop all of your containers automatically.

If you’re ready to master Docker, then check out the Dive Into Docker course.