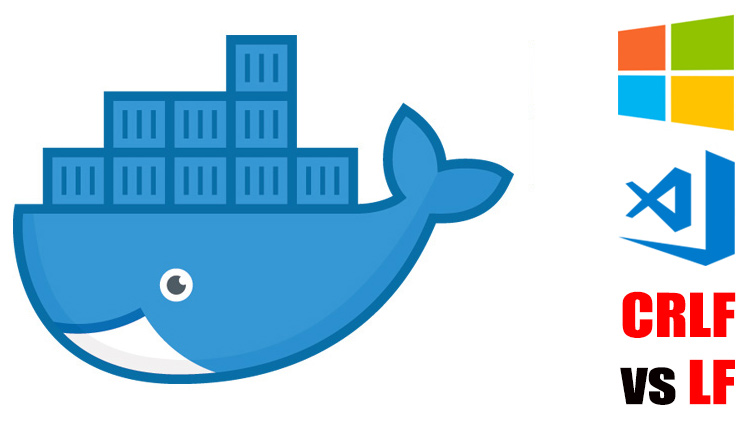 You may have gotten cryptic errors when trying to use ENTRYPOINT scripts in your images while running Windows. Here's how to fix them.

Quick Jump: Does This Error Look Familiar? | Resolving the Error on IRC | Configuring VSCode and WSL for LF Line Endings

Does This Error Look Familiar?

I’m not someone who hacks on the Docker code base itself but when I encountered this error, the exec caught my eye. I thought “hmm, well I’m using exec "$@" in my entrypoint, maybe something is wrong with that?”.

But I knew there wasn’t much that could go wrong because the script did nothing especial.

My ENTRYPOINT Script Was Super Basic

It does nothing except pass control back to whatever process is ran in your CMD instruction in your Dockerfile. That’s what exec "$@" does.

Setting #!/bin/sh is standard for setting up a shell environment. This is exactly what the official PostgreSQL image uses in its ENTRYPOINT script. It also uses set -e which tells your shell to halt on any error, and finally it also ends its script off with exec "$@".

Using that logic, we can conclude without a doubt that there is nothing wrong with the above script in terms of syntax, yet it continues to throw that exec error.

Time to Investigate the Dockerfile

If the script isn’t the issue then it must be the ENTRYPOINT instruction or something to do with permissions on the script itself. Here’s the important bits of the Dockerfile:

If I’ve learned anything from working as a web developer for the last ~20 years, it’s that you should never trust anything from the client.

In this context, that means I shouldn’t trust that the script is already executable when building the Docker image, so even though it adds an extra layer to the image, it’s important to chmod +x the script in the Dockerfile.

I was already doing that because I’ve been bit by that issue in the past.

The entrypoint location is also normal. That’s the absolute path to where it exists inside of the Docker image (it was COPY‘d in a previous step not listed above).

Thought Process on Debugging This Further

At this point the Docker image builds but it fails to run due to the script. The next step is simple then, just comment out the ENTRYPOINT instruction and re-build it. Sure enough, the image builds and runs correctly.

With this new information we now have 5 facts:

Resolving the Error on IRC

At this point my eye was starting to twitch, and when that happens, that means it’s time to ask for external help, so I hopped on IRC.

I explained the situation and within a few minutes we uncovered the issue. I’m including the conversation here because I think the process is what’s important, not the solution:

Looking back, I like ada’s comment here about questioning me on what I meant by “works”. When it comes to real time communication, sometimes you don’t pick your words wisely. What I should have said was the Docker image builds successfully.

Anyways, let’s continue with the conversation:

Yep, I used the word “literally” wrong here because it had set -e and empty lines too! I just wanted to keep the script short on IRC (terrible idea btw).

Oh, now that’s a good idea. I didn’t even think about executing the script manually inside of the container. Thinking back, that was such an obvious thing to do, but guess what, this is how you learn.

If an entrypoint script ever goes wrong in the future for me, or if one of the people taking my Docker course has a problem with an entrypoint script, you can be sure running it in the container directly will be near the top of my list of things to do / ask.

Ok, so, what’s line 3 of the script? Ah, it’s an empty new line. Side note, I didn’t include my exact script when asking for help which was a mistake because from their POV, line 3 was something different. Never try to be tricky when asking for help, but that’s a lesson for another day!

I have to admit, seeing foundypoint.sh there threw me off. What the heck does that have to do with anything. Looking at it now, the entire error is : not foundypoint.sh: 3: docker-entrypoint.sh:

That really says “not found” and point.sh is part of the docker-entrypoint.sh file name. Why it came out like that is above my pay grade, but at least it could in theory make some sense now.

Well, now it’s starting to add up. Guess who moved their code editor to be running in Windows the other month? Also, guess who recently moved to using VSCode? This guy!

Prior to that, I was running Sublime Text in a Linux driven VM for the last ~5 years. CRLF vs LF line endings isn’t something I dealt with in over 5+ years.

Let’s continue with the story because it shows how to detect the issue and resolve it.

Things are starting to drift a little off topic, but ada guides us back to the main problem.

Bingo, that confirms the issue. Pesky CRLF line endings (\r\n) are in the file. The PostgreSQL entrypoint script has Unix style LF line endings (\n), but most code editors and GitHub don’t visibly show this, so it was invisible to the naked eye.

Special thanks to ada, programmerq and mgolisch for helping solve this mystery.

Now we know what we need to do, so let’s do it.

Forcing Unix line endings in VSCode was very straight forward. Just drop this into your user settings: "files.eol": "\n". You could alternatively place that into a workspace setting for specific projects, in case you have projects that run on both Linux and Windows.

New files that you create should have a LF in the bottom right of the VSCode window instead of CRLF, but existing files that have CRLF line endings will continue to be CRLF.

From within WSL run sudo apt-get install dos2unix to install a utility that will automatically convert CRLF to LF.

Then just use it on a file by running dos2unix docker-entrypoint.sh or whatever file you’re converting. Done deal!

Of course, if you’ve been setting CRLF line endings for a project, you probably have a ton of files to convert and doing it 1 by 1 would be really tedious.

For that you can use the power of Unix pipes to recursively run dos2unix against a directory path of your choosing.

Recursively run dos2unix against all files in a path:

That will run it against the current directory. Replace . with a different path if you want.

If you’ve made it this far, now you know why the problem happened and how to fix it.

BONUS: Applying This Process to Other Problems

This is why I stand by the statement that breaking down problems is the #1 skill to have as a software developer. The solution was simple once the problem was understood and we got there by breaking things down and using a process of elimination.

And in case you’re wondering, I most definitely used the Rubber Duck debugging technique before I asked for help on IRC.

Have you ever been bit by CRLF vs LF line endings? Let me know below!