How to Overcome Procrastination with a 3 Pronged Attack 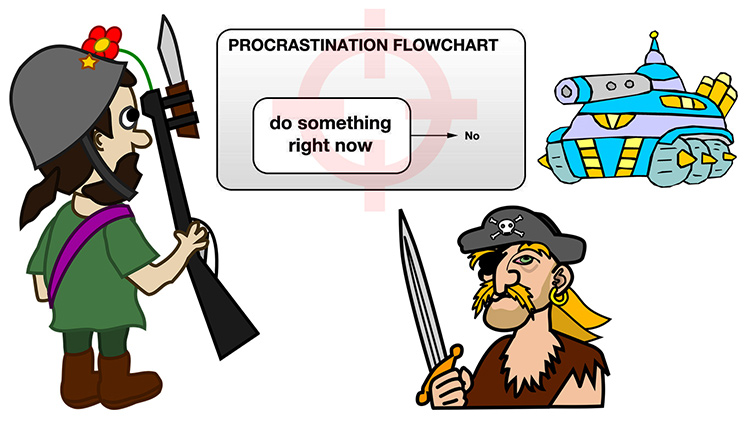 Procrastination haunts most people. I've tried everything and read a ton of material but these 3 tactics helped me the most.

Quick Jump: Identify Your Procrastination Enabler | 1. Create Penalties That Really Hurt | 2. Use Technology to Help You | 3. Change Your Mindset | Now It's Your Turn

Procrastination comes in many different forms but the end result is usually the same. After putting off what you’re supposed to be doing, you’re left feeling extremely guilty and unsatisfied. When you goto sleep at night, you tell yourself tomorrow will be different, but it never is.

I talked a little bit about this once before when I brought up the social loop of death and how schedules can help you become more productive.

Today I’d like to talk more about procrastination specifically and that starts with identifying what you procrastinate on. Everyone has their own problems but when it comes to procrastination, a lot of people fall into the same category.

When I was in school, I was always that kid who got off the bus and did his homework right away. My thought process was, I just want to get this garbage out of the way so I can enjoy playing video games and hanging out with my friends.

Back then, procrastination wasn’t even in my vocabulary and I have vivid memories of really living in the present. What I mean by that is, after I did what I was supposed to do, I was able to live in the moment and fully enjoy myself without thinking about the past or even the future.

Fast forward to today and I’m battling with procrastination on a daily basis for certain things, and no, a schedule alone isn’t going to do jack shit. But I did figure something out that works wonderfully.

I have no problem when it comes to doing what I’m supposed to be doing what I have a real deadline.

When people hire me to do consulting work, I revert to my childhood mindset on doing homework and plow through my work without hesitation and then my reward is being able to spend my time on “me”.

I’ve been doing this for years, and short of some brief periods of burn out I never think twice about getting things done. I’m very confident in performing under these circumstances.

My problem with procrastination is when there are no deadlines and setting an arbitrary deadline does absolutely nothing for me. I tried.

For example, now that I’ve been doing training courses in addition to consulting, I’m finding it very difficult to work on creating new courses.

I know what I want to create courses on, I know the material like the back of my hand, I know what tools to use because I’ve done it a few times already, I actually really enjoy teaching yet when it comes time to do it, I stop dead in my tracks and find myself watching Youtube or reading HN, Reddit, etc..

In my defense I’m going through some medical shenanigans that put a serious blockade on when I can record courses, and that’s still going on now but it will eventually pass.

In any case, for nearly the last month or so I haven’t worked as hard as I should be on creating new training material and after having discovered that I’m someone who needs real deadlines, that has changed.

Posting this article isn’t enough either. Sure, it makes me accountable by openly sharing to the world that I’m working on something new and that you should eventually expect to see it but that isn’t quite a deadline.

So that leads us to the first attack on procrastination.

I was talking to my friend about this the other day and I’ve given him a written agreement that basically states this:

If I don’t produce a reasonable amount of work each day, then I must send him $40 for that day, and each day I fail to produce results I will send him another $40.

If I do what I’m supposed to do, then I don’t have to pay him anything each day.

The key is that progress gets measured on a daily basis. It’s no longer a black and white answer of either “accomplished goal” or “failed goal” after a long period of time.

This isn’t too dissimilar to those sites that you can sign up for where you can have them donate your money to a charity that you hate if you fail to miss your deadline on something.

These might work for long term predictable deadlines but I wanted something more granular, and using those sites for daily work is too tedious and difficult to measure.

Having it be a custom agreement also allows for certain clauses that need to exist. For example, if I have 8 hours of consulting work for a given day then I can’t realistically be expected to get the same amount of course progress done vs a day where I only have an hour of consulting.

Also, in my case, when it comes to dealing with course creation, not all lectures are created equal. For example, before I wrote this blog post today I spent 3 hours writing notes, drawing images and creating slides for a single lecture. That’s not even recording and editing it too, that’s just the planning phase.

Other lectures may only take 1 hour to plan, so this type of work isn’t something where you can simply say “you must write X words and create X slides per day”.

Which leads me to a clause I specifically added to deal with that. It’s called the bullshit clause, which is something that’s important to me. I’m a very honest guy, but I requested that he’s allowed to request proof of my work at any given time.

My friend / accountability partner is a writer and understands technology, so he can gauge how much I should be doing.

If I can’t prove to him that it really took however many hours I had available for course work, then I have to pay him. This becomes an excellent way to practice debating and explaining your thought process.

So in your case, try to find someone who will be your accountability partner. Feel free to email me at nick.janetakis@gmail.com and I’ll happily be yours (as long as you pay me if you fail of course!).

If you’re lucky enough where money isn’t important to you then make it something else that’s painful to you. Maybe you can get someone to whip you in the back with bamboo sticks.

2. Use Technology to Help You

There are a number of free browser extensions and applications that you can use to help you protect yourself from yourself.

For me, I would waste tons of time on Youtube, HN, Reddit, etc.. So I found this great little Chrome extension called StayFocusd.

I’m sure FireFox and other major browsers have a similar plugin.

It only takes a few minutes to set up and it’s anonymous, but it will prevent you from using your “danger sites” by limiting the number of minutes you’re allowed to spend on each site per day.

For me, I set it up to only allow 5 minutes a day on all of those social sites that I use between the hours of 9am and 8pm. So for that 11 hour period of time I can only spend a grand total of 5 minutes across all of those sites combined. After that it blocks me until the next day.

After 8pm the block is lifted. Lastly, I configured it to work with Incognito mode too.

This one doesn’t deal with blocking sites, but instead it overtakes your new tab page, and it does it in a really slick (and anonymous) way.

It asks for your first name, and then it greets you differently depending on what time it is for you locally.

Here, let me just show you: 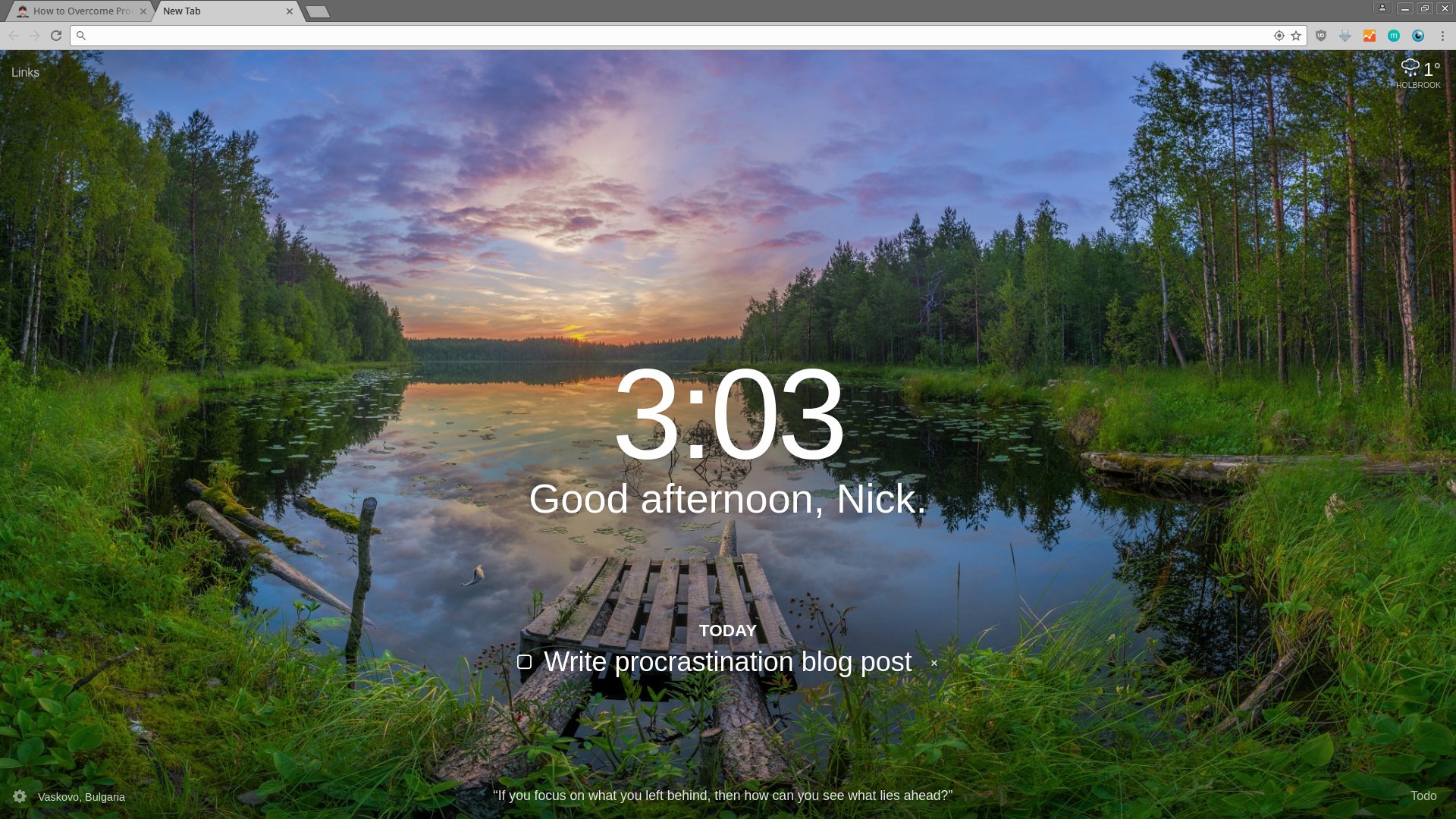 Spoiler alert: the background image changes every day, I really like it.

It doesn’t just greet you too. You can input your 1 goal of the day, so you’re always reminded of it. Then when you’re done, you check it off and enter in a new goal for the day.

It has an optional paid upgrade you can do so it becomes a full blown todo list manager but I haven’t looked into that yet. The free version is great as is.

Every time you go to open up a new tab, you’re reminded of your goal. Combined with StayFocusd, it’s a very powerful way to stay on track. It’s such a simple extension, yet so powerful. I find it oddly encouraging.

When I open a tab now during “work time”, it’s either to check to see if I need to answer any student questions for my courses, or do research for whatever I’m working on.

The first 2 attacks are things you can do to help train yourself to be more productive. It’s similar to how you would wear training wheels to ride a bike before you put on your big boy/girl pants and ride for real.

Honestly, I can see myself using Momentum all the time but my point is, the above 2 attacks can be seen as band-aid fixes. They will absolutely help you, but you’re still not cured of procrastination.

The third attack is completely changing your mindset which I would see as curing you, but like anything in life, you need to practice it. We’re talking about habits here, and the first 2 attacks build good habits.

The mindset switch that helped me the most so far is understanding that I’m not immortal and believing it.

I’m not going to bother opening up religious discussions on this blog, but unless humanity drastically changes in our lifetime, then chances are when your current physical body dies you’re going to either be buried underground and worms are going to feast on your decomposing corpse, or you will end up being a dust pile sitting in an urn within the next 100 years.

After that depends on your religious beliefs but hopefully no matter what you believe, you can at least see that the way you perceive life will change at some point.

If you can believe it, the same procrastination problems we have today were plaguing humans over 2,000 years ago. Lucius Annaeus Seneca is a famous Roman philosopher who lived from 4 BC to 65 AD.

One of Seneca’s best procrastination quote is:

“Putting things off is the biggest waste of life: it snatches away each day as it comes, and denies us the present by promising the future. The greatest obstacle to living is expectancy, which hangs upon tomorrow and loses today.

You are arranging what lies in Fortune’s control, and abandoning what lies in yours. What are you looking at? To what goal are you straining? The whole future lies in uncertainty: live immediately.”

He was a prolific writer during this time and he wrote a book called On the Shortness of Life: Life is Long if You Know How to Use it. It’s only about 100 pages long and is one of the best books I’ve ever read.

You have 3 ways to tackle your procrastination and the ball is in your court.

Let me know your procrastination story in the comments below. Also, if you have any applications or reading material suggestions, I’m all ears.