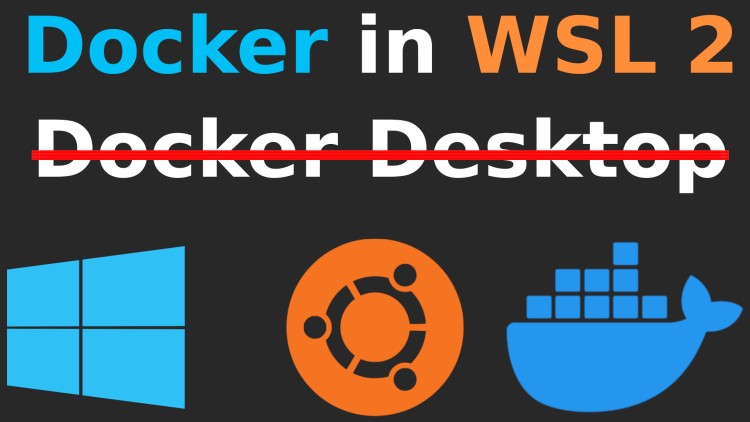 It's really fast and only requires a few lines of shell scripting. You won't need to install systemd inside of WSL 2 either.

Prefer video? Here’s a recorded version of this tip on YouTube. Besides going over the steps below it covers the “why” and the pros / cons of doing this.

This post covers doing this on Ubuntu 20.04 and 22.04 but it should work with any distro that supports running Docker. I say “should” because I didn’t personally try every single distro but there’s nothing about this that would hint it won’t work on other distros.

You’ll get the same conviniences of Docker Desktop such as being able to access localhost in your Windows browser of choice to access any web services you run in Docker since this feature is native to WSL 2. Volumes are also lightning fast (comparable to native Linux).

You’ll also have options to run Kubernetes directly in WSL 2 if you choose to use KinD or any other tool that lets you run a Kubernetes cluster without Docker Desktop.

Since we’re installing Docker directly inside of WSL 2 you won’t need Docker Desktop installed to make this work.

Here’s the condensed version for Ubuntu and Debian based distros:

If you’re using a different distro it’s very similar. Docker has docs for the steps above. These steps came from official Linux installation guides:

At the time of this post systemd doesn’t run inside of WSL 2 by default. We won’t need it.

All you have to do is drop this into your ~/.profile, .zprofile or equivalent file:

The idea here is the Docker service will get started if it’s not already running. The first time this runs it’ll hang your terminal for a few seconds. However, even if you close your terminal the next time you open it, it will open instantly since Docker will already be running. Closing your terminal will not stop Docker, only rebooting Windows or fully shutting down WSL will.

You can run ps aux | grep docker to see the Docker daemon running:

After opening a new terminal you should now be able to run docker run hello-world successfully without sudo. By the way, I have a bunch of open source web app examples on GitHub if you want to explore more in depth examples of using Docker.

As a reminder, WSL 2 still has issues around disk space and memory not being reclaimed. This would be an issue with or without Docker Desktop. This post goes over how to keep your memory and disk space in check.

Have you run Docker like this? Let me know in the comments below!