ngrok, lvh.me and nip.io: A Trilogy for Local Development and Testing 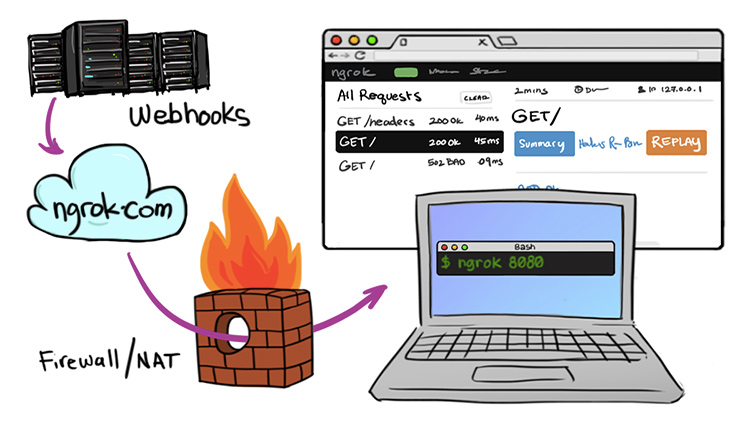 Learn how to accept webhooks on your local web server, work with subdomains on localhost and test Let's Encrypt without a domain name.

When developing real world applications you tend to run into certain road blocks such as:

In this article, we’re going to cover all 4 use cases using 3 free tools and services.

Webhooks are a really powerful concept. They let you integrate with third party services in a very easy way and you can do it without having to constantly pull information from a service.

For example, let’s say you wanted to perform an action after an invoice was created with Stripe. You could just listen for Stripe’s invoice.created event, and when this happens on Stripe’s end, they will send the details of that invoice to a web address of your choosing.

That’s fine and dandy if you’re running in production and have a publicly accessible address such as your domain name but what about during development?

You can’t just tell Stripe to access http://localhost because that address isn’t publicly accessible to the internet.

Not only that, but some services require that you respond to webhooks over HTTPS, so now you would be responsible for setting up HTTPS too, when really all you want to do is test a webhook in development.

This is where ngrok comes into play. It’s a free tool that you can download and run on your dev box. They describe themselves as a secure tunnel to localhost, and it’s just that. It’s as simple as running ngrok http 3000 to forward port 3000 (or any port) to a public ngrok address.

After running ngrok http 3000, you would see something similar to:

And now you could access https://19b31736.ngrok.io which is a public secure version of your local web service running on port 3000. No port forwarding required.

This is not only useful for webhooks but it’s also great to showcase a demo site to a client. I do it all the time. You just spin up the ngrok tunnel and do a live call with a client and walk them through your application without needing to set up a real host.

When it comes to developing sites that use subdomains, this can be a nightmare to set up in development because localhost isn’t a fully qualified domain name. You can’t just goto example.localhost.

Lucky for us, it’s super easy to use subdomains in development nowadays. http://lvh.me is a free service that resolves itself along with all subdomains to localhost.

There’s nothing to install or run. In fact, if you tried to visit that site it would fail unless you happened to have a local web app running on port 80.

If you run host lvh.me you can see that it maps back to 127.0.0.1 which is localhost. Easy peasy. I talked about this host command once when debugging DNS errors with Let’s Encrypt.

So how do you use it?

If you are building a multi-tenant web application and wanted to test the example tenant all you have to do is goto http://example.lvh.me and it would work. Done!

It even works without subdomains too. For example, if you had an app running at localhost:8000 on your dev box, you could goto lvh.me:8000 to load it. Now you can test your app with a fully qualified domain name.

Lastly, setting up Let’s Encrypt for the first time can be pretty difficult. That’s why I put together an end to end video course that takes you through every step of the way.

Anyways, the last thing you want to do is start testing Let’s Encrypt against your real domain name because you could easily blow up your main site if you’re not careful.

Now… you could use a dummy subdomain on your real domain name and this would work (it’s what I would recommend too), but sometimes you’re not at the point yet where you have a domain name hooked up yet.

However, you can get around that by using http://nip.io/ (and similar services).

For example, let’s say you had a real web server running on 42.42.42.42. You could visit http://42.42.42.42.nip.io and that would work right off the bat without having to install or run anything. You could also test your Let’s Encrypt set up against that domain.

Note: I would only use the Let’s Encrypt staging server to test this because all nip.io addresses will share the same live rate limits for certificate creation, but that’s all you need to test your set up.

You could completely replace lvh.me with nip.io, but I find lvh.me a bit nicer to type. If you wanted to stick with nip.io for subdomains you would visit http://example.127.0.0.1.nip.io. Compare that to http://example.lvh.me and now you know why I prefer lvh.me.

So that’s the trilogy. I hope you enjoyed it. I know I enjoy using these tools almost daily!