Passing Exported Env Vars into a Docker Container without an .env File 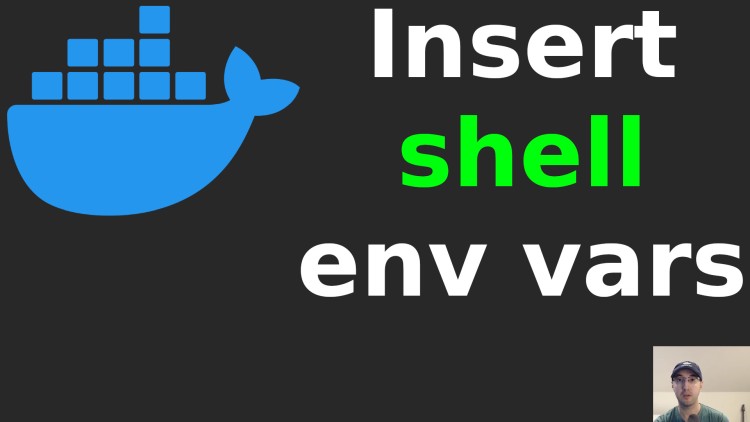 This could be handy if you have encrypted secrets in your CI pipeline and want to pass a bunch of them into a container.

Prefer video? Here’s a recorded version of this post on YouTube that demos things in more detail.

There’s a couple of ways to insert environment variables into a container, such as:

The first option is nice, especially with Docker Compose when using the env_file property. This lets you keep all of your app’s env vars in a single file and easily reference it.

The second option is nice for quickly inserting 1 or maybe a handful of env vars into your container. It also works with Docker Compose using the environment property.

The second option supports passing in multiple env vars like this:

But, recently I learned there’s another variation on this where you can do:

Now you might be thinking “cool story, why not just use an .env file?” and I agree, in a lot of cases using an .env file is more convenient if you have a bunch of env vars to pass in but sometimes it’s not the right choice.

Going Over a Real Example

Let’s say you’re writing a script that you want to run in CI and the script needs access to 10 env variables which are secrets that you have saved in your CI provider’s admin area for defining encrypted environment variables.

Writing a little script to output env vars to an .env file so you can reference --env-file .env feels dirty. It feels like you’re fighting against the system to fulfill a requirement. The file isn’t really necessary and it’s 1 more spot where secrets get logged to disk.

Alternatively you can do:

The idea here is you’ll build up a long string of output that may have -e NAME -e HELLO -e SOMETHING_ELSE. I’m ignoring the APP_ or COOL_ prefix here since it’s not important.

Since you’re probably doing this in a script you could put it all together like this:

That’s it. Now whatever you’re doing inside of your container will have access to all of those variables and you didn’t have to hard code anything!

That looks like a lot of work, especially considering you could do env > .env to write an .env file or perhaps env | grep -E "^(APP|COOL)_.*$" > .env if you wanted the filtered list.

I won’t contest that and I did evaluate that as an option for something I was working on but I decided against it – at least for my specific use case. Here’s why.

I was working on a Dockerized Python script that:

The project itself is in a private repo for a client and they don’t want to store any secrets in the source code itself. Long story short there’s ~25 env vars that have very sensitive secrets. I also modified the SQL script to run it through envsubst to leverage the env vars.

This lets us commit all of the code and SQL to a code repo without committing secrets. There’s an .env.example file commit to the repo documenting each env var but none of the real values are there. There’s just dummy values.

Basically after the dev DB gets created it runs a mysql command to connect to the DB and imports that SQL after it has the env vars injected into it, an example of how that works is mysql ... < <(envsubst sanitize.sql). All of this logic happens inside of a Docker container.

The above solution let me quickly inject all of the CI defined env vars into the container without worrying about keeping around a sensitive .env file on disk. It’s 1 less potential spot where something can get accidentally logged.

Functionality wise writing the .env file would have worked just the same, even with a tiny bit less code (no cut or sed parsing), but in this specific case I preferred a slightly more secure approach. Plus I got to learn a new feature of Docker which is nice, even after using it since 2014. Today is a good day.

What will you use this for? Let me know in the comments below!