Run the First Edition of Unix (1972) with Docker 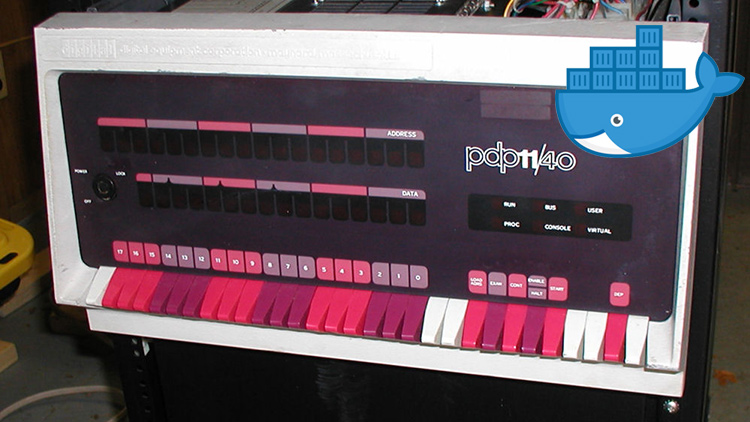 In this article you'll see how to run a PDP-11 simulator through Docker to interact with Unix as it was back in 1972.

One major benefit of Docker is you can run packaged up services without having to install them (or their dependencies) directly on your main OS.

That’s pretty cool. It means we can run a 45+ year old version of Unix on Windows, MacOS or any major distribution of Linux by running 1 Docker command.

When you’re done experimenting, all you have to do is run a different Docker command and your system will be back to pristine condition without any lingering dependencies.

The only requirement is you have Docker installed, so go ahead and install Docker now if you haven’t already. You can use Docker’s official install guides to get you going.

Lucky for us, Brian Bennett put together a GitHub repo that has a pre-made Docker image with everything configured. So all we have to do is run the commmand below and wait a few seconds to get started:

That should drop you into a :login: prompt, as seen below:

But instead of having of buy one, we’ve ran a simulator. This is somewhat comparable to running an NES or game system emulator. It will give us the experience of using it, without needing the hardware.

Logging into the System

At the :login: prompt, type in root and press enter.

You should now see a blinking cursor, we’ve successfully logged into the PDP-11.

At this point we’re ready to start running Unix commands and party like it’s 1972. The only problem is, Bash wasn’t released until 1989 so we’re stuck using the original shell.

That means things we take for granted today like being able to hit backspace, or move the cursor with the arrow keys won’t work. Give it a shot, try typing something and then move the cursor. You can’t. We’ll go over how to clear out invalid commands later.

There Were No Monitors Back Then

If you’re wondering why things like moving the cursor didn’t exist back then, you have to remember, it was a much different time in the early 1970s.

There were special typewriters called teletypes. You typed commands into it, and it communicated with the computer, and then the computer output its display directly onto a piece of paper. If you typed something into the system, there was no going back.

As an aside, this is how the echo command came into existence. You could tell the computer not to echo back some of your commands, which was quite handy for inputting passwords.

How crazy is that. A piece of paper was your monitor. You can see it in action in this Youtube video. Skip around to see how it worked.

Part of the Unix Philosophy states “No news is good news”. Now it makes sense. You wouldn’t want extra text to be printed out when things worked. That’s why most Unix programs output no extra information if they ran correctly.

You’ve probably heard the term TTY before right? That stands for “TeleTYpewriter”.

That whole TTY system was modeled around these original teletypewriters. If you want to know the nitty gritty details on how that works, there’s an excellent write up of it in an article called “The TTY demystified”.

Some commands we use today existed back then. For example you can run ls:

You can even run ls -la:

On a modern day system you could run ls --help to get the man pages for ls but back then you couldn’t do such a thing. The idea of using -- flags didn’t even come into existence until 1980 and it wasn’t considered a standard until 1992.

You can check out what’s available to run by going to the /bin directory. The cd command didn’t exist yet because back then it was named chdir.

As an aside, if you make a typo or invalid command you have a few options. You could run the invalid command and have the system yell at you, or you could enter in the @ character, which was known as the “kill” character. Everything prior to the kill character will be ignored.

For example foobar@ls -la would translate to ls -la. Try it out.

There are 228 binaries to run. Some of which look familiar.

For example, we can output a list of users by using the cat command as so:

Doing Some Self Exploration

If you want to dig around the file system and try a few commands out, please do so. You can read the complete Unix 1st edition PDF manual.

When you’re done playing with everything you can logout by pressing CTRL+E.

That’s going to drop you into the PDP-11 simulator prompt:

You can choose to explore what the simulator has to offer by running help followed by pressing enter, or if you want to quit then run quit instead.

This step is optional, but if you want to clean up any disk space used by Docker you can delete the Docker image we ran before by running docker image rm -f bahamat/unix-1st-ed.

The benefits of keeping it around is the next time you start it, it will start in milliseconds because it won’t have to download this Docker image again. If you delete it now, Docker will simply download it again if you run it in the future.

Going through all of this really makes you think about how good we have it now.

I bet people from the 1970s were really good spellers because not being able to move your cursor is pretty brutal.

Did you discover anything interesting inside the simulator? Let me know below.

It’s also worth noting, you can also use Docker to run web applications and other applications too. If you want to learn how to use Docker in great detail then sign up to the free email course below, or take my complete Dive Into Docker video course at your own pace.