Schedules Aren't a Constraint on Life, They Let You Live It 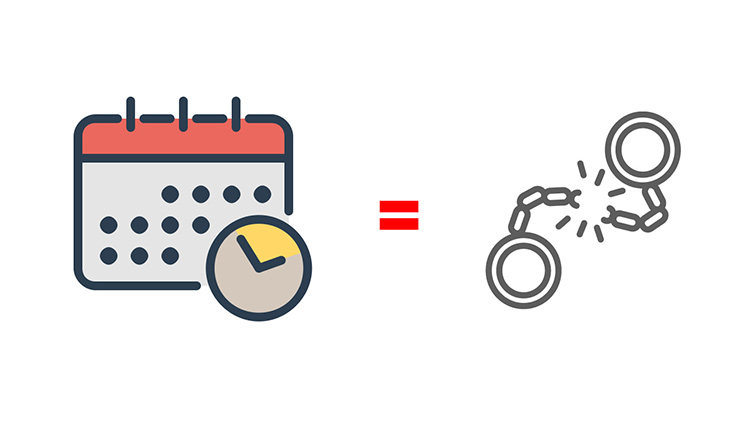 Become aware of bad habits that make you less productive and learn how to break them with proper time management skills.

Quick Jump: A Guilty Conscience Will Consume You | What Does the Social Loop of Death and Smoking Have in Common? | Create Habits That Increase Productivity | Schedules Give You Freedom | Schedules Force Your Brain to Reset | Learn How to Schedule Your Time

It’s easy to fall into habits like slacking off with Youtube, HackerNews and other social platforms – but have you ever stepped back to think how destructive it is?

I call it the “social loop of death” where you make your rounds on various sites and before you know it, 3.5 hours have past and you haven’t gotten anything done.

You end up getting 60 minutes worth of actual work done in an 8 hour day.

Maybe for you, it’s something else but the end result is the same. Your productivity suffers and that has nasty side effects like not being able to enjoy yourself.

A Guilty Conscience Will Consume You

I recently had a friend ask me why I don’t play video games too much nowadays.

My first reaction to that was “I don’t really have time anymore”, but that’s a bullshit excuse, so then on my own I began to really think about it.

I started to think about the days when I was in high school. I used to wake up, goto school, come home, do my homework and then play Quake 3 competitively and have fun with other hobbies.

During the day I felt like I accomplished something at school even if I spent some time cutting class and messing around. When it came time to enjoy a hobby, I felt like I deserved it, so it was pure uninterrupted enjoyment.

Lately I find it difficult to enjoy playing games but I don’t think it’s because I grew up. I’m pretty sure that no one really grows up. In my case, whenever I try to crack open a game and play it, I feel guilty.

This guilt stems from thinking “damn it Nick, you should be working on xyz instead of slaying monsters in Path of Exile – you didn’t do enough today!”.

That guilt is capable of consuming you to the point where it’s impossible to get any enjoyment out of your hobby and in most cases prevents you from even opening up the game or whatever you find fun.

However, you’ll quickly revert back into the social loop of death and convince yourself that tomorrow will be a new day and you’ll buckle down.

What Does the Social Loop of Death and Smoking Have in Common?

I think in general humans are just very habit based, but the good news is that habits can be changed. I speak from experience too because I quit smoking cigarettes cold turkey about 5 years ago on the first try.

I can’t even give you non-smokers an analogy or something to compare that to because quitting smoking is that difficult for most people.

In case you’re trying to quit smoking, the secret is that you really have to want to quit. As soon as you truly have a desire to quit then it’s only difficult for a few days.

Just like smoking, you can break your social loop of death habit.

Quite a few billionaires and tons of successful business owners tend to have 1 thing in common – they live by their calendar.

If it’s not on the calender then they don’t do it. Some of them even go as far as scheduling out every 15 minutes of their day.

I’ve heard the whole schedules and to-do lists are awesome spiel years ago but quickly dismissed it because I didn’t believe I had a problem.

Your Ego Is Wrong, Schedules Aren’t a Crutch

If you’re like me, you might have thought that schedules are only used by people who fail at life. Wow, I was so wrong. A schedule is a tool to manage your time.

Previously I convinced myself that one reason why I won’t work in a corporate environment or at a traditional job is because I enjoy the freedom of making my own hours and a tight schedule is the opposite of freedom.

Schedules Give You Freedom

I still highly doubt I’ll ever work a traditional job but I’m beginning to see that schedules aren’t taking away my freedom, but instead they are giving me a very reasonable way to manage my time.

I tend to be a very all or nothing person. When it comes time to create a new course or do whatever I happen to be working on, it will consume me until it’s done but often times the social loop of death will constantly distract me.

Schedules Force Your Brain to Reset

If you sit there for 9 hours straight working on something then you’re not going to be as productive as you were 7 hours ago.

You don’t even need to be working on it too. If you continue to think about it while in your social loop of death or while failing to enjoy something you’re not taking a break from it at all.

Having a schedule lets you mix things up which in turn gives you a fresh outlook on something rather than just spinning your wheels with a guilty conscience.

Want to know the difference between a programmer and the so-called “10x programmer”? Amazing time management.

Time management is a legit problem, but it’s also solvable if you want to change. If you struggle from the same things as me, try scheduling out your entire day.

Learn How to Schedule Your Time

Check out the follow up blog post that covers 5 steps you can be doing today to start scheduling your time. It’s what I use whenever I need to get something done.

I’m curious to hear what your social loop of death is and if these same problems plague you while working a more traditional 9-5 job.