Taking an Indefinite Break from the Running in Production Podcast 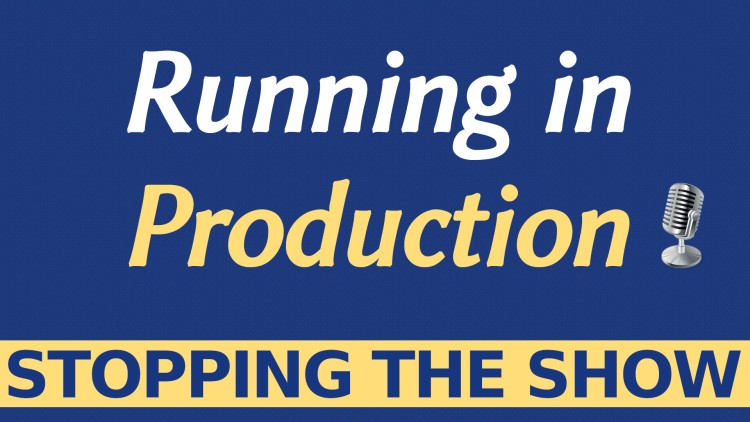 After 100+ episodes and 2+ years of trying to make it work, I think it's time to take an extended break.

Quick Jump: Maybe It's Not Meant to Be | An Alternate Reality | What to Expect Moving Forward | It Feels Good to Fail

Prefer watching a video instead of reading? Here’s a ~15 minute video version of this post with a bit more context around a few things:

Before we get into this, I first want to say if you listen to the show I’m sorry it’s very likely coming to an end and if you shared the show with your friends I really appreciate it.

I really enjoy chatting with other developers about their tech stack but I’m starting to get burnt out from editing each episode.

It takes about a full day to put together 1 episode from end to end. That includes:

Also, recording for 1 hour doesn’t mean 1 hour of real life time. It means stopping what I’m doing 10 minutes before the show to prepare everything and usually the guest and I chat for 10 minutes before we hit record to get used to each other.

Often times we’ll chat for another 20-30 minutes after the show. I’ve had chats for 4 hours after the show with some guests too. I really enjoy this part. It’s fun talking shop with folks about tech and based on how eager most guests are to come onto the show I have to think others feel this way too.

Then there’s a cool down period to decompress after the show to get back into the next thing. It’s a very big context switch and being on the ball for 2 hours engaging in a genuine in-depth technical conversation with someone is both draining and energizing.

After most shows I find it essential to go for a long walk or jog to hit the reset button.

Maybe It’s Not Meant to Be

With that said, I don’t think the show is meant to be and I can’t figure out why it’s not growing. I put a new episode out every week for over 2 years so I think I gave it a fair shot.

I tried to optimize the site for obtaining information folks care about as fast as possible. That means extensive tagging and being able to filter out things like “show me folks who built sites using Flask”, writing TL;DR timestamps for every few minutes of audio so you can jump into a specific point of the show quickly and more.

Marketing wise all I really do is post an occasionally tweet and sometimes comment in threads on HackerNews and Reddit (never in a spammy way). Perhaps more could be done here but I was aiming for word of mouth and search engines to provide organic growth.

What bugs me is I’ve gotten a good amount of emails and DMs on Twitter from folks saying this is their favorite tech podcast and are so happy someone finally made a show around how real people and companies are building and deploying their web apps.

It’s also rated 4.9 / 5 on iTunes and if I look at the stats on iTunes and Spotify most episodes have 40-50%+ of folks completing them with 75% of listeners usually making it through the first third of the show. Keep in mind episodes range from 1 to 2 hours, that’s a long show.

I never started the show for riches and glory but we do live in a world where I have to eat, pay bills, take care of family and think about my future.

Personally I work ~45 hours a week (full time) and also put out a weekly blog post / YouTube video. I haven’t posted a new course in 3 years and it has nothing to do with not wanting to, I just can’t do all of this alone and it’s reckless to spend so much time on the podcast instead of chipping away on something that is working.

I would have liked to continue doing the show, get sponsors, outsource all of the editing, create transcripts instead of timestamped show notes and bring the podcast down to something I do for 2-3 hours a week while making some income from it.

But it’s hard to find sponsors when you only get ~2,000 downloads a month on average. Keep in mind that’s not per episode, that’s total MP3 downloads across all episodes over a 30 day period after 2 years of weekly posts.

I mean, it makes sense right. If you were a business trying to make money it’s hard to justify putting money into something where you might not get a positive ROI.

It’s also a tricky balance because you can’t scale sponsorship rates down to total downloads and have it work out when the numbers are low. It’s silly to be like, sure let’s spend all of this time setting up a deal and I’ll compromise the show with an ad-read for $11.41. It’s just not worth it for sponsors, myself and most importantly you the listener.

Plus, I’m very weird with things like this. I couldn’t sleep at night pitching services I haven’t extensively used first hand. I would never want things to come down to accepting money to help sell something I don’t know anything about while reading from a script.

That’s a complete violation of trust between myself and anyone listening which also makes me think maybe I’m not cut out for this type of business.

With that said, there still would have been tons of opportunities for great sponsors because I am in the same business as what the podcast covers. I use a lot of these services in my day to day, however…

It kind of feels like sponsorships are a feast or famine situation. You need to grow really large before thinking about sponsors but if you can’t grow then maybe it’s a sign to stop.

Unfortunately businesses don’t have the same mindset as myself or individuals. I personally don’t mind linking out to 100+ services or openly talking about them positively for years with no expectations or compensation. That’s just the type of person I am, deep down seeing others succeed is what makes me happy.

Anyways, this isn’t meant to be a sob story or a fuck the system post.

What to Expect Moving Forward

I just want to want you know there will no longer be weekly episodes of the Running in Production podcast. I have 6 unedited episodes left to publish and I will publish all of them. Perhaps I’ll post those once a month. After that, that’s probably it.

I’ll continue keeping the domain up and host all of the episodes. I don’t mind paying for that because who knows what will happen in the future. Maybe something with change and I’ll resume where I left off, or I’ll do a 1 off episode when I’m truly motivated to do so.

It Feels Good to Fail

Truthfully I don’t see this as a failure because I am a firm believer that everything you do in life leads to something else. You’re an accumulation of the choices you’ve made.

From a direct bottom line business perspective this was a catastrophic failure. I’ve put in easily 800-1,000 hours of my own time into the podcast and walked away with a net loss of money from hosting fees and that 1,000 hours that could have gone towards making an entire new course, something else or simply relaxing.

But I don’t see it like that at all. I see this as having had 100+ conversations with 100+ people I didn’t know beforehand and I learned something new in every episode, either something new about tech or how others think about problems and what they’ve learned along the way. That’s the good stuff.

I feel like a better person and the lessons I’ve learned from all of this has led to me to being a better version of myself, both in the present and the future.

I regret nothing and as for feeling good… after deciding to write this I’m happy because I’ve come to terms with this decision and can now focus on other things without feeling guilty or letting anyone down.

What was your favorite episode from the show? Let me know below.