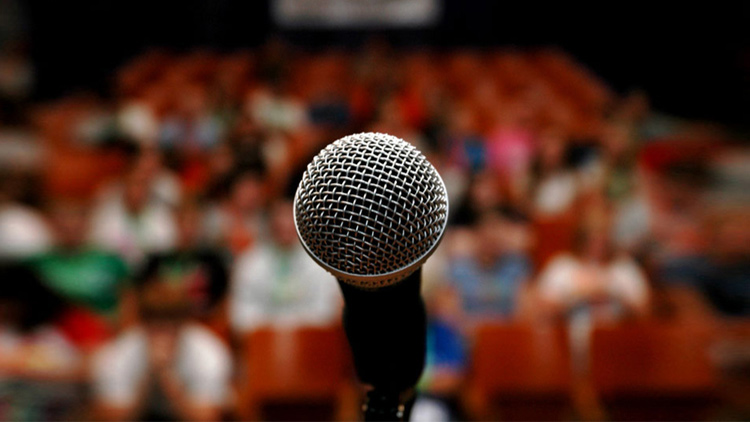 Public speaking is a skill you need to build up like anything else. I have no experience with it, but here's how I plan to fix that.

Like most people, I have issues around public speaking

That may sound weird considering I’ve released 5 video courses over the last 2.5 years and have somehow managed to reach 20,000+ people with those courses.

It’s natural to assume that someone in a teaching position would be super out going and comfortable speaking in front of people, but that’s not the case for me.

Recording Courses Is Not Public Speaking

All of my courses are recorded in the comfort and privacy of my office. It’s just me recording my screen using Camtasia and a microphone. I don’t even record my face with a webcam.

Not only that, but I plan the shit out of my courses. I will sit there and script every word I plan to say in a markdown document. I do this for both my benefit and yours.

It’s beneficial to me because it lets me organize everything I want to cover in a specific video and it’s beneficial to you because there’s no annoying “umms” and missed points. It’s very thorough, but it’s also very concise.

When I deliver the script, I stick to it about 80%, but just knowing it’s there takes a tremendous amount of pressure off my shoulders.

You could say that script is my insurance plan.

One cool perk about being a software developer is we tend to be really good at detecting patterns and solving problems (ok that’s 2 perks, I lied).

Public speaking fears and issues is just another problem that can be systematically broken down and solved. If you’ve read my blog for a while you know that I always circle back into saying breaking down problems is the #1 skill you can have.

But breaking down problems isn’t enough.

How many times have you gotten stuck on a problem that seems impossible to solve because you didn’t understand the problem in the first place? This happens to me often.

So I think the first thing necessary to conquering public speaking is figuring out what bothers you about it.

What’s your problem with public speaking?

For me, I think it’s mostly not being confident enough in myself that I’ll be able to string together a coherent thought process without a script.

That is hilarious to me because I’ve done hundreds of hours of live Skype / Hangouts calls while I’ve solved unknown problems on the spot and explained things to various freelance clients and I have no problem there.

But when it comes to talking over slides, or being expected to “present a talk”, then my whole brain shuts down.

I guess I’m also uneasy with talking in front of an audience too but I’ll chalk that one up to being a bit uncomfortable in my own skin, but if you want to put values on it, it’s like 65% not being able to say what I want to say and 35% that I’m up in front of a bunch of people.

I have no fear about being ridiculed or killing my brand because I know the people who support me through my courses wouldn’t care if I messed up.

At this point, we’re well on our way to solving the problem because we understand it. Now we can focus on overcoming our specific fears.

Before we get into tactics on how to overcome public speaking, you might be wondering why you want to improve this skill in the first place.

Why Is Public Speaking Important?

One of my life’s goals is to travel the world. Deep down I do want to be that person giving talks and helping people learn about subjects they care about, both on video and in person.

In order for that to happen I need to slay my demons and become an expert at giving live unscripted talks.

Posting this makes me a little uneasy because I try to keep my blog focused on software development, but as I get older, the more I realize that your actual programming skills only plays a small role in being a happy and successful person / software developer.

There’s a lot more to this world than just writing code and even if you don’t have the same exact goals as me, you’ll probably have to at least give a presentation or do a whiteboard interview at some point in your career and public speaking skills will help you here.

Actionable Steps to Get Better at Public Speaking

WARNING: Everything you’ll read on this blog is based on past experiences, but this is the one time where I’m theorycrafting a plan which I will execute in the future. Welcome to the unknown!

The first thing I did was see if there’s anyone like me. We’re all human here and sometimes it helps to know that thousands of people have the same fears and concerns as you.

It didn’t take long to find Toastmasters. It’s an organization that has local events around the world. These events are filled with people who want to get better at public speaking.

The events are free and they happen on a very regular basis, but most of them don’t even require committing that you’re going to go. You just show up.

To me this is step 1. It’s building up a positive database in your brain that you’re capable of getting in front of people and talking without dying.

When I go, I’m not even going to prepare a talk. I’m going to request to go up and stand there in front of everyone, but then ramble about how I am just doing a self diagnostic test to ensure I’m humanly capable of speaking off the cuff with an audience present.

I’m going to see how long I can last on stage by trying to talk and interact with the audience.

I may end up doing that multiple times before I decide to prepare some type of tech presentation. Once I feel comfortable doing that, it’s onto the next thing.

Lightning talks are short 5 to 10 minute talks where you go up and talk about something you care about. 5 minutes is a long time, but other than doing something like a 20 second announcement, it’s about as short as it gets for a tech presentation.

I’ve seen a bunch of lightning talks on Youtube, and it seems like a reasonable next step.

I didn’t even think about doing this as a next step but I happened to have a nice chat with Julie Lerman the other day and we got to talking about giving talks. She’s very well known in the .NET community and is a champion public speaker.

She also happened to become a Docker Captain recently, which is how we met. You could even say this post is inspired by our conversation, thanks Julie!

After giving a couple of lightning talks at local meetups, a natural progression will be to give a “proper” talk. It shouldn’t be too scary because quite a few people in the audience will be your friends, since you’ve seen them at previous meetups.

The key here will be preparation and practice. I will absolutely script this out, and then read it out loud many times on my own, until I feel comfortable enough to give the talk without using the script. The slides should be enough to guide you.

I’m going to assume that it won’t matter if you talk in front of 10 or 100 people because it’s probably all the same. One tip a lot of presenters say is to talk to 1 person in the crowd, not everyone, and then switch every 30 seconds or so, or whenever you finish a point.

4. An Hour Talk at Local Meetups

An hour is a lot longer than 20 minutes, that’s for sure. I remember giving a remote 20 minute talk over a live stream and it felt like forever, but I also delivered it in like 14 minutes because I was talking super fast.

This was before I started doing courses and my delivery was horrible. Nowadays people always comment on how relaxed and energetic I sound in my recent courses. That really is concrete proof that practice practice practice is very important.

Anyways, I’d expect to do at least 10x 1 hour talks, whatever it takes. I am going to do different talks, such as a couple of Docker talks, and then maybe some on Flask and Rails, etc.. There’s a lot of material I could cover.

If you know your material well, teaching it live is a great way to test out material. At this point you’ll have a decent amount of experience talking in front of a group and teaching in front of a real class seems like you’ll gain valuable feedback.

You can see people’s faces to see if they connect with what you’re talking about, and you’ll get all sorts of feedback on your material. It should be a great way to iron out the kinks in your delivery and content.

It should also give you a lot of experience for answering questions off the cuff and dealing with unscripted content because a live teaching environment is much different than projecting a presentation to an audience.

6. Talking / Keynoting at a Conference

I don’t think there’s really any way to prepare for this. I mean, sure the first 5 steps are preparation which build up a few diffent skills, but how can you prepare for this?

I imagine this is a much different animal. You might be up there with 7 different cameras on you along with dozens of people in the crowd recording you. It’s also likely going to be uploaded on Youtube and you’ll forever be attached to that conference.

I’m going to assume auto-pilot will take over here. You’ve done your preparation steps and have the material down cold. You’re ready for it.

A natural progression to this would be eventually being a keynote speaker at a conference. This is typically reserved for people who are truly experts at speaking and have a fair bit of influence in the community.

This step is way out in the future, so it’s a bit hard to think about how it will work exactly. For me, I’m going back to step 1 and will get to practicing.

What have you done to improve public speaking? Let me know below.