Why Sublime Text 3 Is Still My Preferred Code Editor 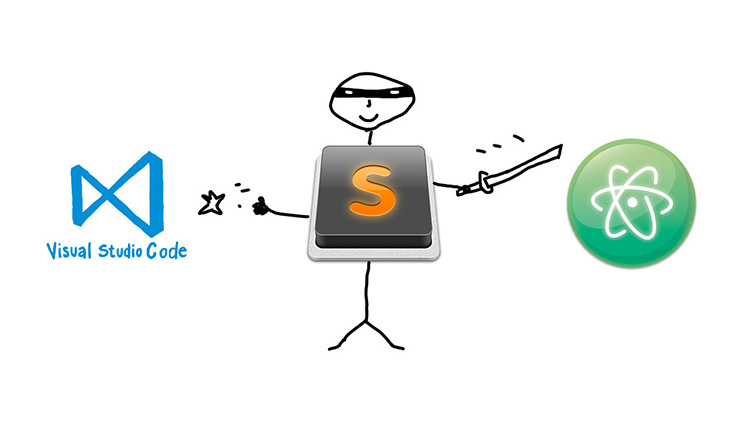 I am still using Sublime Text 3 in 2017 because it stands up to my high demands as a full time developer and content creator.

Quick Jump: What Are My Expectations in a Code Editor? | Is Sublime Text 3 Perfect?

In Nov 2017 I finally made the switch to VSCode because the pros out weighed the cons.

See my VSCode set up

After giving Visual Studio Code and Atom both a fair test for months I’m back to using Sublime Text 3 and I’m not looking back.

Why’s that you might ask? It has the least amount of annoying little bugs that you may encounter dozens of times a day with the above editors.

I only just realized how good Sublime Text 3 is after having not used it for about half a year. I forgot how solid and fast it is. The community is awesome too.

What Are My Expectations in a Code Editor?

Well, I want it to sync up to my brain and just write the code as I think of it but we’re not quite there yet, so for now I will settle with:

Sublime is a champion in this department.

The last thing I want to deal with is lag when I’m coding. I’m fortunate enough to have an SSD and a pretty decent workstation (i5 quad core) but certain editors do not feel good, at least not on Linux which is where I do my work.

I don’t want to wait around for laggy code-complete windows, random 2 second hitches or dealing with poor performance due to a buggy editor.

I also don’t want to deal with random crashes through out the day, or having to restart it after a bit because its performance deteriorates over time.

Let’s face it, if you’re staring at your editor for hours a day it should look appealing to you. I don’t want to make pretend it’s still 1976.

I want something modern looking with a ton of different themes and color schemes to choose from because I tend to get bored with color schemes quickly.

Atom in my opinion has the potential to look a lot nicer but I’m ok with how Sublime Text 3 looks.

Sublime has syntax highlighting packages for everything I have ever needed.

I’m not sure why but pleasant looking syntax highlighting makes me really happy and since my technology list will grow in time, I want an editor that will grow with me when it comes to supporting different file types.

As developers, we’re often writing documentation. This could be for your own projects or packages that you plan to open source.

My weapon of choice for that is Markdown so I want an editor with the best possible Markdown experience I can find. Sublime has the MarkdownEditing package which has been an amazing experience.

Sublime has decent enough support for it with buffer-level completion.

I used to be really hung up on things like this in the past, like OMG I can’t do anything without RubyMine’s context aware auto-complete for Rails code but honestly, it’s not that important.

With Docker becoming more and more popular, editors need to re-think how they determine where code is being loaded from.

At the moment not even RubyMine can pull in code that’s sitting in a Docker container, and I’m not willing to give up Docker just for auto-complete.

If you want access to library code on the fly, then you can use tools like Dash on OSX or Zeal on Linux / Windows. It has integration with Sublime through hotkeys.

If you haven’t heard of Dash or Zeal before I recommend checking them out because it’s going to make your life way better when hunting for documentation.

Sublime opens in less than a second, it feels nearly instant.

If I’m popping in and out of files on a regular basis, I don’t want to sit and wait for multiple seconds while a clunky editor loads.

You might say, well if you’re working on a big project, you are only going to generally open your editor once a day and that’s totally true and I 100% agree with you, but I’m constantly opening config files on my system too. I like the idea of using 1 editor for everything. It makes me feel at home.

Sublime does a lot of little things right.

There’s a lot of little things you take for granted but when you step back and think about them, you only then realize how useful they are.

For example here’s a few things I love about Sublime:

It’s definitely not perfect, but for the time being it works and I no longer feel the need to search for something better as my day to day editor.

What I’d really like to see is not another similar editor to Sublime, but something that drastically changes how we interact with a code base and files.

If you’re interested in seeing which Sublime Text 3 packages I use and how I have Sublime configured, then check out my post on 25 Sublime Text 3 Packages for Polyglot Programmers.