Updated on September 3rd, 2019 in #dev-environment

Why the Amazon Basics Keyboard Is My Favorite Keyboard 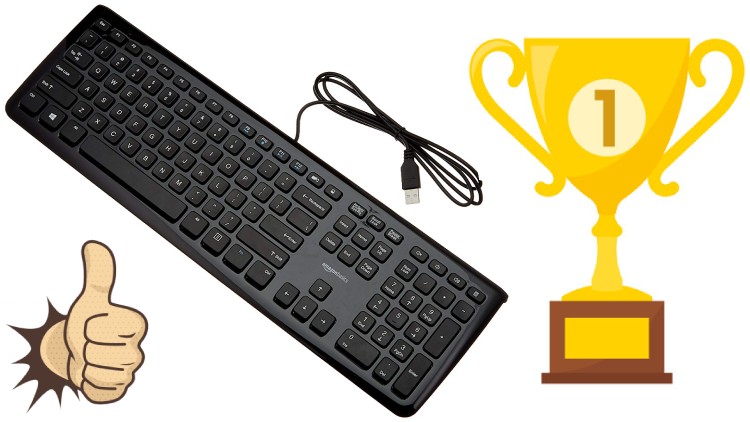 I've been typing for 20+ years and this is one of my favorite general purpose / programming keyboards when factoring in a few things.

I’ve been using the same Amazon Basics keyboard for ~5 years and only recently bought a new one because a single key started to die out which was the \ ( |) key. For someone who enjoys shell scripting, having a non-responsive pipe key isn’t fun!

When it comes to picking a keyboard, I’m coming at this from the perspective of:

I’ve used at least 10 different keyboards over the years and I can’t think of one that I really preferred over this Amazon Basics keyboard. It hits all of the major points that make a keyboard good and it also happens to only be only $14.

Although the keyboard is cheap in price, I haven’t found another keyboard that I liked as much as this one at any price point. I did a lot of looking around too.

What Makes a Keyboard Good?

These are mostly opinions of course, but here’s what makes me happy when typing.

I have one freelance client (ahem Ryan!) who has really loud mechanical key switches. Every time we hop on a screen sharing session that involves typing I can’t tell if he’s lighting off fireworks in his office or writing code.

Jokes aside, I totally understand the appeal of mechanical keyboards. I’ve used them and it is satisfying to hear that clickity-click sound and the keys do feel amazing but that just doesn’t work for me due to being on so many pair programming calls and recording video courses.

Based on a lot of video course feedback from folks, I’ve come to understand that it’s important to hear key switch presses on video but they shouldn’t be too loud. If it’s silent then it doesn’t seem natural and it’s harder to follow the videos and if it’s too loud then it becomes a massive distraction.

If you’re curious what the Amazon Basics keyboard sounds like on video, listen to this Youtube video for about 8 seconds. I didn’t do anything special to try and mask the sound. I have a dynamic microphone 1 foot above the keyboard for reference.

Of course it’s louder in real life when typing because your ears pick up a lot more than a dynamic microphone which is very focused on capturing positional audio. If you want more general sound samples you could do Youtube searches for the Amazon Basics keyboard but I wouldn’t bother since any mic pickup is going to be a lot different than your ears.

I tried a bunch of keyboards and this one is really very quiet while having tactile feeling keys.

There is an amount of satisfaction you get from pressing a key, but it’s not all about feeling good for pleasure. It’s very helpful to know that you’ve pressed a key to help figure out if the character you pressed ended up passing through.

That means I typically do not like extremely low profile or flat keyboards since they tend to lack that. But even if they had enough feedback, keyboards with low profiles produce no audible key presses on video, so that’s a deal breaker for me. On the flip side, full height keys tend to be too noisy.

The Amazon Basics keyboard fits in between with mid-height keys. They have a decent amount of resistance to them so you can definitely feel each key press, but it’s not so much that it hurts your forearms after long hours of coding.

Mid-height keys also lead us into another win.

I’m not a complete slob but I am guilty of eating at my keyboard sometimes and I would say my hands are sweatier than average, especially during high humidity summer days when I can’t turn the A / C on since I’m recording videos.

Needless to say crumbs, hair, dust and hand grime (yum) are probably going to build up on any keyboard over time unless you’re the neatest and most strict person in the world when it comes to using computers.

I don’t know about you but I clean mine on a semi-regular schedule. About twice a month.

I wipe it down with a dry towel and sometimes shake it upside down. I even tweeted about this once in relation to dodging bullets while cleaning my keyboard with Vim open:

I just realized I cleaned my keyboard with a towel while having Vim open and focused. Nothing bad happened. #dodgingbullets

After a quick wipe down it looks pretty much as good as new – even years later. The mid-height keys are excellent for avoiding dirt and stuck keys because it’s almost impossible to get anything stuck under a key. Only dust particles get caught under there.

With all of that cleaning and usage you would hope that the key labels don’t scratch off over time and this is definitely a problem with other keyboards.

After ~5 years of extensive use and abuse only 3 keys had minor chips in their label. I lost the upper part of the L’s label, a third of the O’s label and half of the ,’s label. Not too bad IMO. I’ve seen a lot worse with less usage.

The labels look like very tightly pressed stickers that are flat to the touch. They almost look like maybe they were heat sealed onto the surface of the key. It’s hard to say.

Even if I take my nail and try to scrape off a label, it doesn’t budge. I’m guessing the 3 labels chipped after extensive wear and tear. Those are also the keys where I typically rest my index finger on (I’m not a home row typist), and they are very popular keys in general.

Speaking of keys, it’s a nice perk to have a keyboard that has extra keys that you can configure without bloating the size of the keyboard. Amazon has done a fantastic job here at maximizing the usable space of their keyboard.

You get the following media / extra keys:

That’s 9 distinct keys or 13 if you count the media combo keys. That’s really useful. You can always remap any of them to other actions if you prefer. It’s a dream come true if you plan to use something like i3wm on Linux which is heavily keyboard shortcut driven.

Compact Size but Sticks to Standards for Key Placement

Some keyboards try to shrink their physical dimensions but do so by making unreasonable compromises such as having a tiny backspace key, a small backslash key or stuffing keys in weird places for the sake of cramming everything together.

It’s important to have things like the insert, delete, home, end and the page keys where you expect them. The same goes for the arrow keys and having a full size numpad.

Everything is where you expect it with this Amazon Basics keyboard and you get the full size backspace / backslash keys.

I’m sure you’ve seen keyboards where the lights of these keys are all grouped together near the top right of the keyboard instead of being on the key, such as what you see below:

This comes down to poor UI design or bad tech choices. You want related things to be together. If I have caps lock on by accident, I want to be able to look at the caps lock key and see the light. I don’t want to have to look on the other side of the keyboard.

Thankfully I swapped my escape and caps lock keys a while back so it’s nearly impossible for me to have caps lock on but still, having the lights where they should be is useful.

With this keyboard, each lock key has its own light which I animated below:

Ability to Press Many Keys Simultaneously (AKA. Key Rollover)

Certain keyboards are better than others when it comes to how many keys you can press at once before additional keys are not registered.

This is typically called rollover, or more specifically n-key rollover or multi-key rollover depending on what style of rollover your keyboard supports. Wikipedia has a good explanation of it.

Out of everything listed about this keyboard, its rollover is its biggest weakness as it only supports a 2 key rollover in the worst case. However in practice, this isn’t a problem and a lot of keyboards also have a 2 key rollover so it’s not like this one is terribly worse.

I never noticed it playing fast paced FPS games like QuakeLive where you’re usually pressing 2 movement keys down along with another key to jump and other keys to switch weapons.

You can test your keyboard’s rollover in this online test. Your rollover is the worst possible value you get. So if you press ws down and then hit a but you don’t see the count go up, then your rollover is 2 even if you pressed ws down, hit n and you get 3.

With the Amazon Basics keyboard I’ve seen as high as a 6 key rollover when pressing spui<space>c. I really wouldn’t worry about it. I included rollover because it is a metric to measure the “goodness” of a keyboard and I’m not trying to make a purely positive post about the keyboard.

I’m very much unbiased and tried my best to find faults with it. When it came to replacing my previous keyboard I tried very hard to find a new keyboard just because I’m always on a quest to find something better, but I couldn’t find anything better for my use cases.

I very much prefer wired mice and keyboards. I don’t want to worry about keeping them charged or having added latency and using a wire makes both of those problems go away.

But that means wires can get beat up over time because typically a wire will naturally find its way to an edge of your desk. This is more of a problem with a mouse since you tend to move them often, but I’ve seen keyboard wires get mangled over the years.

I have to say the Amazon Basics keyboard is solid in this area. Even on my old keyboard from years ago, the wire has zero signs of wear and tear.

There’s 4 pretty large rubber grips on the edges of each corner so there’s really no reasonable chance of it ever slipping from pressure or normal usage.

To put things into perspective I did a little experiment. I put the keyboard at the front edge of my desk and then I grabbed the top and bottom edges of the keyboard with my fingers near the middle.

Then I slowly moved my feet back while extending my arms forward to almost an extended push up position. The last time I weighed myself I was 155 pounds and while it did start to move before I was fully extended, it probably took about 80 pounds of pressure before it slowly crept forward.

A very stupid test I know, but I’m just trying to say you don’t need to worry about it slipping when typing under normal conditions, even if your keyboard is resting on smooth wood.

What’s your favorite keyboard and why? Let me know below!