Would Socrates Use Docker Today? 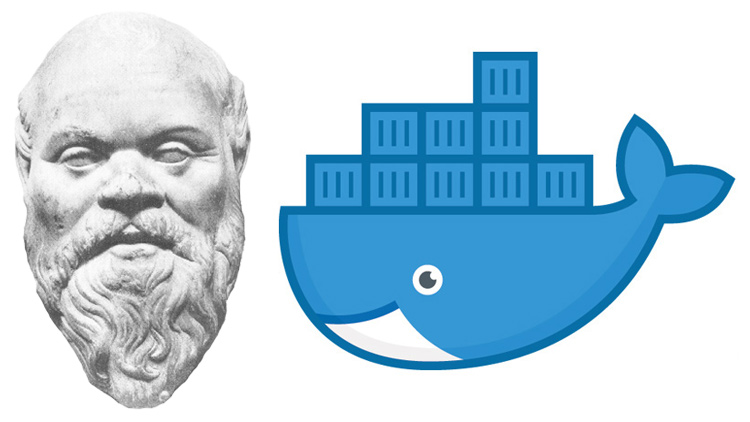 Socrates left behind a way to deeply explore a topic in a systematic way. It's called Socratic questioning. Let's apply it to Docker.

Quick Jump: What Questions Do We Need to Ask? | Applying Socratic Questioning to Docker | Wrapping Things Up

Remember Socrates? He was that really smart Greek guy from about 2,500 years ago. His most famous student was Plato and he’s responsible for laying down the groundwork for modern day philosophy and science.

One of the teachings that Socrates left behind was a concept called Socratic questioning. It’s a systematic way to explore a topic in great detail by asking questions.

What is Socratic questioning (quoted from Wikipedia)?

Socratic questioning is disciplined questioning that can be used to pursue thought in many directions and for many purposes, including: to explore complex ideas, to get to the truth of things, to open up issues and problems, to uncover assumptions, to analyze concepts, to distinguish what we know from what we don’t know, to follow out logical implications of thought or to control the discussion.

As it turns out, Socrates gave us a way to analyze topics in a repeatable way. We could use this for anything. We could use it to make big life decisions, pick tonight’s dinner or figure out what technologies are worth learning (hint hint).

Yep, that means something invented 2,500 years ago can be applied to problems and issues we have today. As an aside, this is why I try to teach both the “why” and the “how” in all of my courses because understanding both allows you to go from copy / pasting code to being able to solve any problem in your path.

In this article, we’re going to explore Docker using the Socratic questioning strategy.

What Questions Do We Need to Ask?

If we head back over to the wiki, there’s a section that lists 6 types of questions:

Each of these 6 types of questions have many sub-questions that could be asked to explore any topic. We’ll see how to apply all of these to Docker after we list them out.

Think more about what exactly you’re asking or thinking about. Prove any concepts you claim.

Probe your assumptions and think about unquestioned beliefs which found your argument.

Probing for Reason and Evidence

Dig into your reasoning rather than assume it is a given.

Most arguments are given from a particular position. So attack the position.

Do the implications and consequences make sense and are desirable?

Question the Question Being Asked

Challenge and dismantle the question.

Now that we have a list of questions to ask, all we have to do is answer them. I’m not going to answer every single question but I will answer a few of them in each category that strongly apply to Docker and technology choices in general.

The beauty of this exercise is that often times there isn’t 1 correct answer. I would love to read your answers to any questions in the comments below. Also, feel free to answer or ask additional questions if you think it fits!

Think more about what exactly you’re asking or thinking about. Prove any concepts you claim.

Probe your assumptions and think about unquestioned beliefs which found your argument.

Probing for Reason and Evidence

Dig into your reasoning rather than assume it is a given.

Most arguments are given from a particular position. So attack the position.

Do the implications and consequences make sense and are desirable?

Question the Question Being Asked

Challenge and dismantle the question.

This question type is a bit different than the others. We’re meant to take any of the above questions and continue to break them down while questioning them.

For example, let’s operate on What would happen if you didn’t use Docker?

One of the ways we could question that question is with:

As you can see, Socratic questioning is very powerful. It’s almost like making a pros and cons list except it’s much more systematic and structured. This allows for you to get a much deeper understanding of any topic.

We’ve only barely scratched the surface here with Docker. If I spent all day writing this article, it could easily become 15,000 words instead of 1,500!

To answer the title of this article, which was “Would Socrate Use Docker Today?”. I think he would. Of course that’s my opinion but by exploring these questions we’ve determined that there are clear benefits to using Docker and Socrates was a very logical person. There’s no reason to think he wouldn’t use it if he were around today.

By the way, if you think Docker is a great fit for you and you do want to learn it, then check out my premium video course which is Dive Into Docker. It’s filled with tons of practical examples and you’ll be comfortably using Docker for your own projects by the end of the course.